Selection of Apps designed for Navigation

A selection of Apps designed for Navigation onboard, by Simon Phillips

This is based on Garmin’s excellent BlueChart marine charts and is so easy to use. The radial menu, waypoints and route management are extremely intuitive. While underway, your position and selected route display clearly. The app has a complete set of features, including tides and currents, sun and moon phases, wind speed and direction, and a distance-measuring tool. For route planning, the app integrates with ActiveCaptain, you can also sync between Garmin devices, planning a route on your iPad, then wirelessly syncing it with your Garmin chartplotter.

The app is not intended to replace a chartplotter, but it is well suited for route planning. Unless you’re connected to a Garmin Quatix watch or an onboard Garmin network, the app cannot enable an active route, provide a “go to” navigation display or import waypoints and routes.

Garmin BlueChart Mobile is free and includes a high-level world chart; BlueChart maps can be purchased in-app, you can also get “premium weather,” including radar and satellite imagery for a small fee. 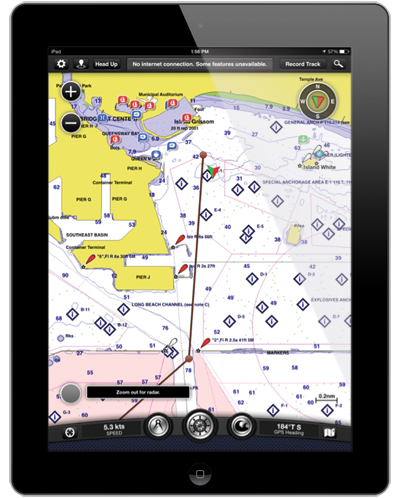 NavX is one of the most established navigation apps and supports free U.S. NOAA raster charts as well as several other charts and maps that you can purchase separately. Once installed, the charts are saved in a traditional chart table menu, which groups charts according regions. Once a chart is selected, your position is displayed real-time, with the ability to pan and zoom. To select a different scale chart, return to the chart menu or zoom in and out, and then select the appropriate scale chart. The app features waypoint and route management, GPX import/export, GRIB weather forecasts, tides and currents and port/navaid search. It even integrates with NMEA data over Wi-Fi to serve as a repeater for GPS and AIS. It does not include community guidebook integration.

Although iNavX is probably the most full-featured navigation app around, it is not the easiest to use. 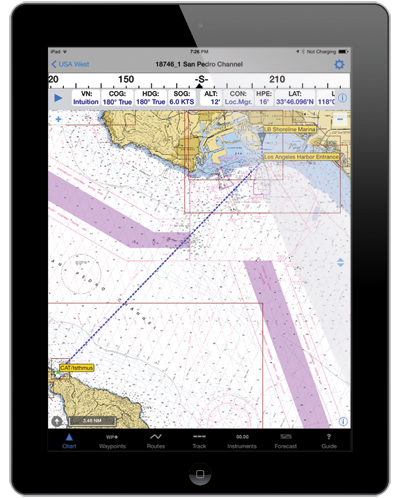 iSailGPS is one of the least expensive navigation apps that uses the free NOAA raster charts. The app features chart download and management, as well as import/export of waypoints, routes and tracks. While navigating a route, data for position, distance, speed, bearing and heading are all displayed at the top of the screen. 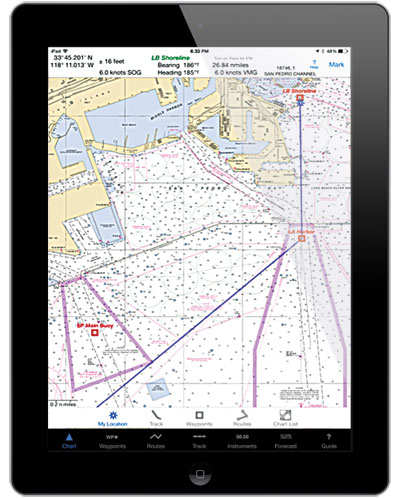 iSailor is a relatively new navigation app with a stunning user interface and an extensive chart library, grouped into chart folios of TX-97 vector charts. Chart regions cover most popular cruising areas in the world. Running on either an iPhone or an iPad, iSailor supports route and track views, as well as all of the integrated information in a vector chart. iSailor allows you to add objects to your own downloaded charts, but lacks community markers and guidebooks. 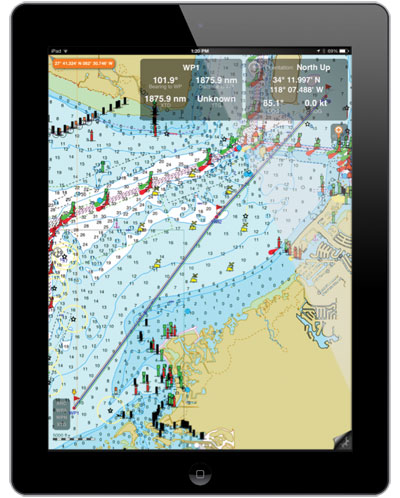 Navimatics is another one of the more established nav apps. The app itself is free and utilizes standard NOAA vector charts, which can be purchased by region. The app features chart-quilting for seamless display, as well as a built-in search function for finding any location, marina or navigational item. While under sail, a unique Horizontal Situation Indicator graphically displays your route’s current track, desired track and cross-track information. The app includes information on tides and currents, sun and moon position, current weather through National Data Buoy Center stations, and community guidebook information via ActiveCaptain. 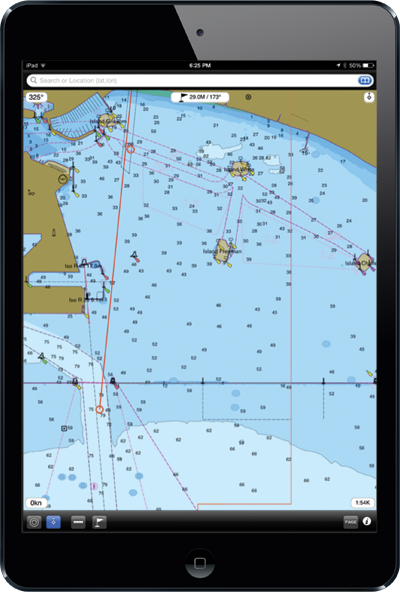 Navionics has long been one of the best navigation apps available for Android and IOS devices. It incorporates the excellent Navionics Gold vector charts with map, satellite and terrain overlays, all for free. The user interface is intuitive for panning and zooming; tap on the chart to display a cross-hair pointer that can either become a waypoint or display local information on weather and tides, wind forecasts, currents and moon/sun phases. Creating and editing routes is a matter of placing marks along the route; edit by moving or deleting marks. Tracks can be shared via email or social media. For advanced navigation features such as auto-routing and sonar charts, purchase in-app enhancements.

It allows for Plotter Sync through which users can wirelessly transfer routes and waypoints from their app to a plotter. (Raymarine, Navico and some Simrad, Lowrance and B&G models are also Sync-capable.) It also integrates with the “Navionics Community,” a group of some 1.5 million users that regularly contributes to a directory of marine services, waterfront restaurants, magazine articles and travel guides. Most recently, this Community has been tasked with improving the charts of the East Coast by sharing its local information. Finally, unlike the old app, new chart regions seamlessly blend together with existing charts.

The app is free, but you must purchase chart regions and other upgrades. 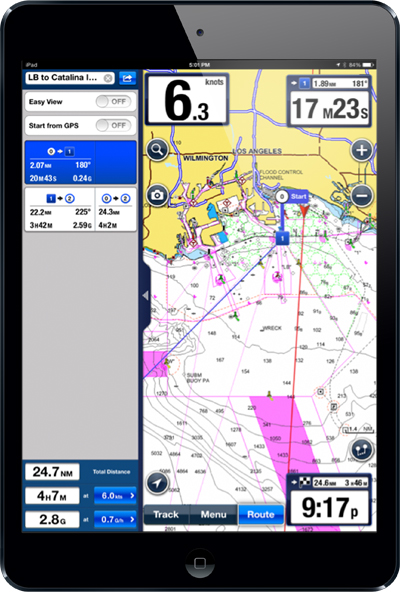 PolarView MX is a free app that integrates with ActiveCaptain and supports NOAA vector and raster charts. The space within the display is used effectively, providing maximum detail without a lot of overlays or unnecessary functionality. Real-time navigation information, including GPS position, SOG, COG, distance and bearing, shows at the top of the screen in a transparent layer.

For the price, Polarview MX is quite usable. The app lacks waypoint, route and track features, but if you are looking for a free off-line NOAA chart viewer with ActiveCaptain, it will be fine.

SeaNav US/UK is a relatively new navigation app by PocketMariner that borrows its style and many of its features from the company’s signature app, Boat Beacon. With SeaNav a user can plan and navigate with NOAA vector charts in the United States and UK Hydrographic Office (UKHO) charts in the UK and Ireland. Chart tiles automatically download as you scroll the high-level map view, and the display includes map, satellite or hybrid modes.

Tap on the chart to explore objects, such as buoys, lights, bridges and ships, or to search for a place or its coordinates. The augmented reality view also shows a live camera view from buoys and ships, including their names, range and bearing. 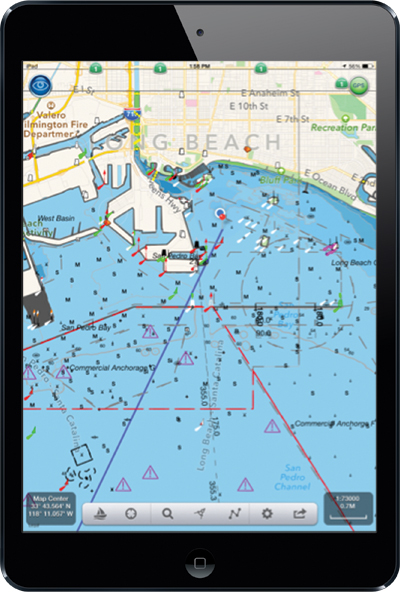 Skipper is an exciting new app that utilises NOAA raster charts and automatically stitches them together for seamless display. Street maps, satellite imagery and terrain maps can also be overlaid on charts with varying levels of transparency.

The free app provides a basic simple-to-use NOAA online chart viewer and satellite imagery. For an annual subscription, you can also store charts offline, manage waypoints and routes, sync across multiple devices, display weather and tides, and sync with ActiveCaptain. Compared to other apps, the subscription seems reasonable considering the rich set of features and chart overlays that’s included. 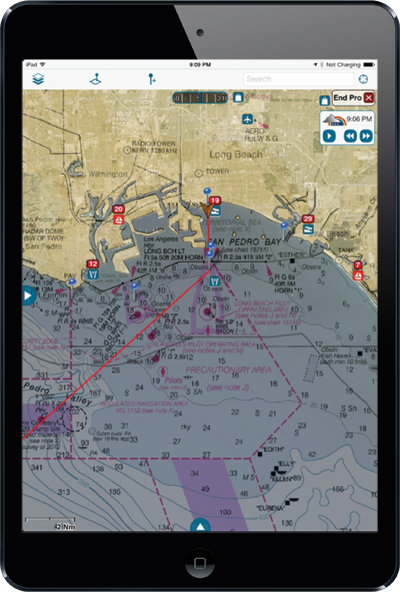 For: Android smartphone and tablet/iPhone/iPad

BoatBeacon is a handy app for navigating high traffic anchorages and areas not far offshore. So long as the user has an Internet connection (typically no more than 15 miles off the coast), they can track boats on AIS as well as boats without AIS that are using BoatBeacon. With BoatBeacon, sailors can view other ships’ photos and details like CPA, speed, heading and size. The app also continually updates positions and AIS even when it is running in the background. Thumbs up: collision-avoidance is always “on”; thumbs down: so is the drain on your battery. Finally, the app has a social aspect that allows users to share data with friends and family through email, Facebook or Twitter.

Like many other navigation apps, the PathAway Express app plots tracks, waypoints (with photos as well as descriptions) and routes. The distinguishing feature of the Fugawi PathAway Express Edition app, however, is that it allows users to create customised charts and multi-layered maps. One of the app’s newer features is a Weather Forecast map that can be layered onto other charts and displays conditions such as wind, precipitation and temperature. This feature does, however, come at an added fee. With PathAway, sailors can import maps from practically anywhere—whether from an online source like Google maps, or downloaded from PathAway maps or any other BSB/KAP navigational chart application. There are a few versions of the app. In PathAway GPS Professional Edition, users can track other boats as well as display several tracks and routes simultaneously. The free version includes the basic tracking functions, but its charts are not full-screen due to advertisements. 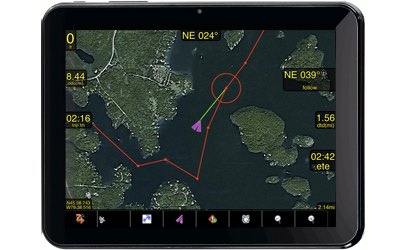 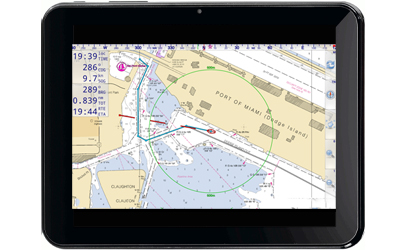 MX Mariner allows for free installation of raster charts from NOAA, as well as LINZ in New Zealand, UKHO in the UK and Ireland, and the Brazil Navy in Brazil. Offline, the charts are static. Online, the charts show detailed maps with roads and satellite images. The app displays not only a boat’s current position but SOG and COG as well. MX Mariner also allows users to plot waypoints, tracks and routes by importing them as GPX files. As a bonus, the app features multiple light settings for a variety of conditions—whether you’re sailing mid-day or at sea in the dead of night.